A few weeks ago, I was running an errand at the local post office. As I was leaving, I saw a plaque on the wall that I had not noticed before. A large greeting card display normally hides it from view. It is engraved with all the names of Wellington’s postmasters, from Nathan Wooster in 1833 to James Sosinski in 1995. As I looked over the list of names, I was surprised to see that the village had a female postmaster appointed in July 1898. Readers of the blog may recall that I published a small volume of biographical essays on nineteenth-century Wellington women back in 2017; my first thought upon seeing this plaque was wishing I had known about our female postmistress before going to press!

The woman in question was Mary L. Herrick, born in Huntington on October 24, 1865. She was a younger sister to Myron T. Herrick (1854-1929), Governor of Ohio and United States Ambassador to France. Mary was thirty-two years old when she was appointed as Wellington’s postmistress by President William McKinley, who was a close friend and political ally of her brother. 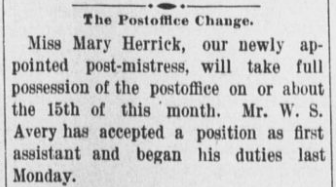 Herrick was unmarried at the time she assumed the role of postmistress in August 1898. The 1900 federal census showed her lodging with a couple called Robert and Harriet Codding. Her occupation was listed as “postmaster,” a position she held for four years. On October 3, 1902, just shy of her thirty-seventh birthday, Herrick married a man eight years her junior, a doctor from Wellington called Arthur B. Smith. The wedding was celebrated at Myron Herrick’s mansion–known as The Overlook–in Euclid Heights, an affluent development in what is now Cleveland Heights.

The Smiths moved to San Diego, California, sometime between 1910 and 1930. Arthur died in 1948, after serving honorably as a major in the Medical Corps in World War I, and Mary died in 1956. The couple are both interred in Greenwood Cemetery. After Mary Herrick relinquished the title of postmistress, it would be eighty years before another woman served as “Officer in Charge” of Wellington’s mail delivery.

2 thoughts on “The Postmistress”