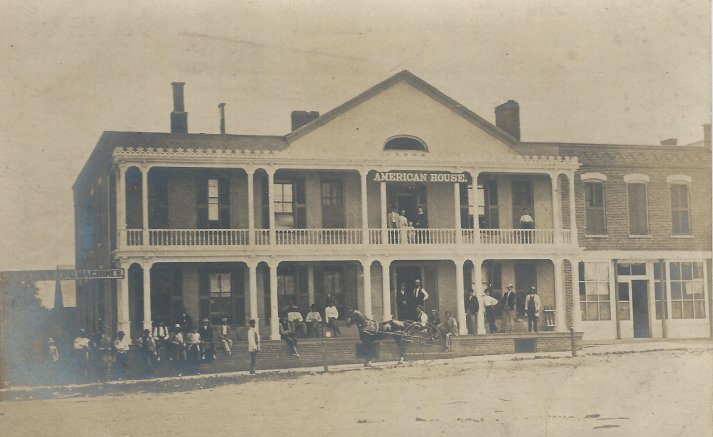 I received the loveliest piece of mail this week. A person whom I have never met, who does not even live in Wellington, sent me a beautiful handwritten letter and enclosed a gift: an unmailed postcard depicting the American House hotel. The sender explained that he had very much enjoyed reading the recent bicentennial insert published by the Elyria Chronicle-Telegram, particularly the article on the Oberlin-Wellington Slave Rescue of 1858, one hundred and sixty years ago this September. He enclosed the postcard as a thank you for my work on preserving local history.

The hotel was first built around 1833, owned and operated by the Wadsworth family. It had numerous proprietors and was known by multiple names over the years, most famously as the American House in the late nineteenth century. It closed its doors for good and was quickly demolished in April 1902. Purchased by soon-to-be governor of Ohio, Myron T. Herrick, the hotel was removed to make way for a new town library, which was dedicated and opened to the public on the same site in January 1904. Initial plans for the construction of the library called for the reuse of some 150,000 bricks from the hotel; perhaps there is yet some part of the American House still standing in Wellington’s Public Square to this day.

3 thoughts on “An Unexpected Gift”