Frederick Douglass (1818-1895) photographed ca. 1866. Original image is held in the collections of the New-York Historical Society. Accessed via Wikipedia Commons.

The year 1818 may be notable locally as the year in which Wellington was first settled, but it was also the year in which a renowned nineteenth-century American entered the world. Frederick Douglass (née Bailey) was born into slavery on Maryland’s Eastern Shore in February of that year. 2018 therefore marks the bicentennial celebrations of our small village and also arguably the greatest orator our country has ever produced.

The story of Frederick Douglass’s early life is well documented in his three autobiographies. He escaped enslavement with the help, and financial assistance, of a free black woman named Anna Murray, whom he later married. The two made their way up the east coast, eventually settling in New Bedford, Massachusetts when Douglass was twenty. The young man became active in local abolitionist circles and quickly developed a reputation as a powerful public speaker. The growing family (Frederick and Anna eventually had five children) later moved to Rochester, New York, where Douglass launched an abolitionist newspaper he called the North Star, a reference to the guiding light by which those escaping from slavery charted their course to freedom.

Over the course of the 1840s and 1850s–the decades immediately preceding the Civil War–Douglass traveled all over the northern United States and Europe speaking out in favor of immediate emancipation and civil rights for black Americans. He reportedly made over one hundred speeches per year in the 1840s alone. Douglass rejected outright the assertion that people of color living in America were not its citizens, as well as the racist assumption that they were not capable of full participation in its democracy. The orator was also a strong proponent of equal rights for women and advocated in favor of female suffrage at the Seneca Falls Convention of 1848.

Douglass was a regular visitor to Ohio. He was offering speeches in the state at least as early as 1843. In the summer of 1847, he toured Ohio and Pennsylvania with abolitionist and newspaper editor William Lloyd Garrison (1805-1879); during that tour, Douglass spoke at First Church, in Oberlin. He attended the first National Convention of Colored Citizens, held in Cleveland in 1848. His daughter, Rosetta, attended the Oberlin College Ladies Preparatory Department in 1854. Douglass wrote approvingly in the North Star that the black community of Ohio was “stemming the current of the most raging floods, combating every opposition, resisting every obstacle until at length they have forced the dominant class in their own state to notice and respect their efforts” (6-29-1849). 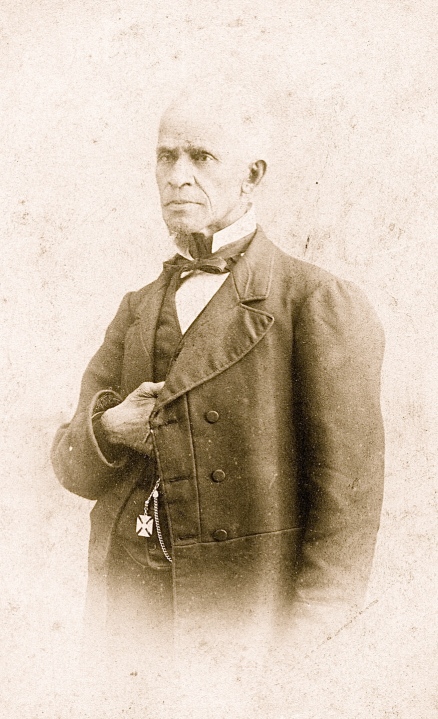 During his travels, Douglass met a minister, entrepreneur and civil rights activist called R.J. Robinson. The two men served on the Equal Rights League together in 1865, and both attended the Colored Men Conventions mentioned above. Robinson was born free in Virginia–coincidentally, also in 1818–and had moved in the fall of 1860 from his home in Illinois to a little village in Ohio called Wellington. It may be that R.J. Robinson was responsible for inviting Frederick Douglass to come speak in his adopted home, as the nation struggled to come to terms with the meaning and consequences of the war it had recently waged.

The Wellington correspondent for the Lorain County News first reported in early 1868, “We understand that Frederick Douglass has been engaged to deliver a lecture in this place sometime in March next, notice of which will be given in due time” (1-29-1868, pg. 3). On March 18th, the paper reminded its readers that “the Colored Orator of world wide reputation will lecture in this place on Friday evening of next week–under the auspices [of] the Wellington Reading Room Association. Don’t fail to hear him” (pg. 3). The following week, locals were again urged to attend the lecture, as “we do not often have an opportunity of hearing as distinguished a man as Fred” (3-25-1868, pg. 3). After Douglass’s “well attended” presentation, the correspondent concluded, “All were well satisfied, and speak of it in the highest praise” (4-1-1868, pg. 3).

Douglass was officially invited to come to Wellington by the Reading Room Association, an exclusively male club first formed in the summer of 1866. Its membership rented space over Levi Bowman’s clothing store on the western side of South Main Street. (Regular readers of the blog may remember the Bavarian-born Bowman as the Freemason who brought painter Archibald Willard into Wellington Lodge #127, or as the employer of a young woman who died tragically after a botched medical procedure.) The Lorain County News printed a reader-submitted description of the room when it first opened: “Its files and tables are supplied with a large selection of the first class periodicals, dailies, weeklies, monthlies, and quarterlies, both domestic and foreign, of literary, political, fictitious, and religious characters, such as are suited to all tastes in all moods. The room is open for the resort of members at all hours of the day, and until ten or after in the evening.” The group’s aim was to offer a regular schedule of “public lectures and literary entertainments” (8-8-1866, pg. 2). It is not clear whether women were intended to be part of the audience.

Based on the business names and buildings shown in this image, it most likely dates to the 1870s or early 1880s. In the mid-1860s, the Wellington Reading Room Association occupied a rented room over Levi Bowman’s clothing shop on Public Square. The circled area indicates what I believe to be its location. The building still stands today. Image used courtesy of the Southern Lorain County Historical Society, “The Spirit of ’76” Museum.

When the Wellington Enterprise commenced publication on September 19, 1867, its very first front page also sang the praises of the reading room, “a feature of Wellington seldom found in towns three times as large and often not in cities.” The room was by that time open not only to its male membership, but also to “persons here for a short period,” presumably referring to gentlemen passing through town on business via the railway. “Strangers and persons in the place, transiently, are entitled to the privileges of the Reading Room on payment of fifty cents per month[.] A small fee, indeed.” The presence of such an amenity in the village demonstrated, in the publisher’s opinion, “the progressive spirit of our citizens and their appreciation of the beneficial.”

There were multiple literary and library associations convened in Wellington during the nineteenth century. In fact, a literary society open to men and woman formed in the village just three months after the reading room opened; it met weekly at the town hall. (At that time, the town hall was the wood-framed “Old Free Church” located on the western side of South Main Street, near the present location of the Congregational Church.) It is difficult to parse the relationships between these various groups, if any. A library association that existed in the 1880s seems to be the one which eventually turned its holdings over to the Wellington Township trustees, a collection which then formed the nucleus of the Herrick Memorial Library when it opened in 1904. At present, I do not know if that library association had any connection to the Reading Room Association of the mid-1860s. 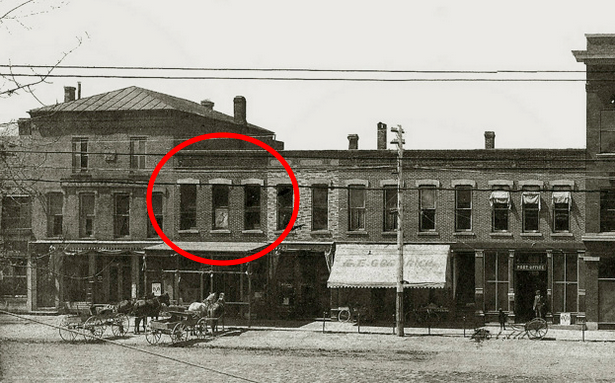 Early-twentieth-century image of the west side of South Main Street. The circled area indicates what I believe to be the location of the Wellington Reading Room Association in the late 1860s. The building still stands today. Photo courtesy of the Southern Lorain County Historical Society, “The Spirit of ’76” Museum.

No issues of the Wellington Enterprise survive from the period of Douglass’s visit, and published accounts of the address do not mention where it was held. While those notices characterize his oration as “well attended,” it is not clear what that means. We do not know if the Reading Room Association usually invited speakers to appear in its own, members-only, space. Just after Christmas in 1866 (and again the following year), the association advertised a “grand entertainment to be held in Franks’ new Hall.” Perhaps the use of the hall was necessitated by the “elegant supper” accompanying the entertainment, which was to be served by “the ladies.” No mention was made as to whether ladies would be permitted to attend the event, or simply to cook the food afterward (Lorain County News, 12-19-1866, pg. 3 and 12-4-1867, pg. 3). The third floor of H.B. Franks’s lovely Italianate commercial building had a permanent stage and was used for public performances in the decades prior to the construction of the Opera House. It was erected at the town center in 1866, but burned down in 1915. If my theory about the location of the Reading Room Association’s headquarters is correct, that building survives to this day.

Italianate commercial building erected by H. B. Franks in 1866. Later known as both the Rininger block and the Horr block, it burned in 1915. Formerly located on the northern corner of Main Street and Mechanics Street (now East Herrick Avenue). The third floor of the building was used as a public performance space from its earliest days. Photo courtesy of the Southern Lorain County Historical Society, “The Spirit of ’76” Museum.

It feels fitting to close this post with some of Frederick Douglass’s own words, a flavor of what his Wellington audience was treated to one hundred and fifty years ago this very night. In 1867, he published “An Appeal to Congress for Impartial Suffrage,” in which he demanded the right to vote for citizens of color. “Man is the only government-making animal in the world. His right to a participation in the production and operation of government is an inference from his nature, as direct and self-evident as is his right to acquire property or education. It is no less a crime against the manhood of a man, to declare that he shall not share in the making and directing of the government under which he lives, than to say that he shall not acquire property and education. The fundamental and unanswerable argument in favor of the enfranchisement of the negro is found in the undisputed fact of his manhood. He is a man, and by every fact and argument by which any man can sustain his right to vote, the negro can sustain his right equally. It is plain that, if the right belongs to any, it belongs to all.”