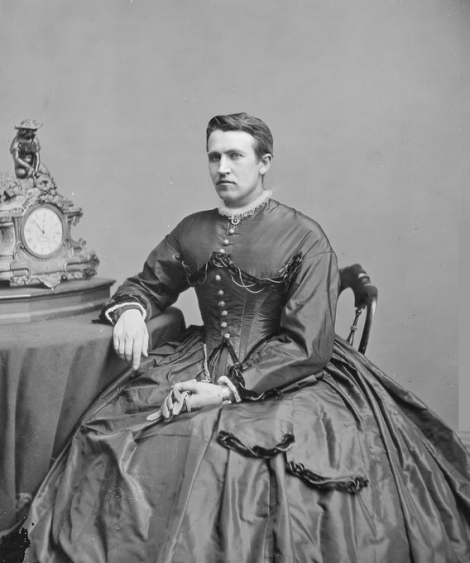 There are numerous examples on the Internet of images that purport to show nineteenth-century men and women cross-dressing in studio portraits. I cannot personally attest to the authenticity of these images as a whole, but this particular concoction is an imposition of young Thomas Edison’s head onto Clara Barton’s body.

“ARRESTED IN WOMAN’S CLOTHES.–A person in woman’s apparel came in this morning on the Toledo train, and going to the Pittsburgh Railroad ticket office, asked for a ticket to Wellington. The person’s voice was so unfeminine as to attract the attention of an officer standing by, and a very masculine face was discovered to belong with the masculine voice. Officer Warren took him into the Soldiers’ Aid Rooms, and he acknowledged that he was sailing under false colors. He had a black bag containing his suit of men’s attire. He had $2 in money in his pocket, and a piece of paper containing directions how to proceed from some point on the Milwaukee and Lacrosse Railroad to Wellington, Lorain county, Ohio. He was not disposed to be communicative at all. He said his name was Foot, and that he came from Wisconsin. He did not disclose his object in assuming female attire in which to travel through the country. His age, we should think, is about twenty-one years. Warren asked him if they dressed in Wisconsin in that way, and he replied rather dryly, ‘The women do, mostly.’ He was taken to the watch-house, and is most persistently silent. A gentleman who saw him, remarked that he desired no better evidence that he was not a woman, than his ability to hold his tongue afforded. It sounds like an aspersion on the sex. The young man might have belonged to the band of rioters in Oseaka [Ozaukee] county, Wisconsin, who recently resisted the draft with so much violence. If so, the female attire is a disguise which he assumed in order to make his escape. There is no law in Ohio as there is in New York, making it a punishable offense for either sex to don the other’s peculiar attire. The young man may be very much wanted in Wisconsin, from whose cherishing protection he was at so much pains to flee” (Cleveland Daily Leader, 11-15-1862, pg. 4).

I confess that when I first read the above notice, I suspected it was what we today call “fake news.” The most amusing and salacious tidbits that crept into nineteenth-century newspapers are often the most difficult to substantiate. I wrote once before about a humorous 1836 letter to the editor that seems to have been fabricated. But the more I dug into the details of this report, and a subsequent piece that appeared in the same newspaper two days later, the more I was able to corroborate. This incredible story seems to be true.

Andrew Jackson Foote was born June 21, 1842 in Tioga, New York. He appeared in the federal and New York state censuses in 1850 and 1855 living in the household of his parents, William Claybourne Foote (1803-1881) and Sarah Bromley Foote (d. 1867). By the federal census of 1860, the family had relocated to Westfield, Wisconsin and it appears that all of Andrew’s siblings had moved away or died, leaving him the sole of six children still at home.

In 1862, Andrew would have been twenty years old, very close to the estimation of “about twenty-one years” made by the Cleveland Daily Leader reporter. But in a follow up story, it was noted that Andrew “claims to be but sixteen years of age.” This may be an important detail.

“THE MASQUERADER.–The young man who was caught at the depot masquerading in women’s clothes, is still at the Station House. He says his name is Andrew Foot, and that his home is in the town of Oxford, Marquette county, Wisconsin. He claims to be but sixteen years of age. He wished to leave home and come to Wellington in this State, and learn the harness makers trade with a brother who resides there, but his parents opposed it, so in order to get away he [line of text missing] -ing a description of the direction necessary for him to take started. Having his own clothing in a carpetbag he intended to change his suit after getting started on the route, but found no opportunity. He has written a letter to his brother in Wellington, making known his situation and beseaching [sic] him to come and release him from dusance [durance] vile. He don’t like [look?] like a dangerous character and is evidently an inexperienced boy caught in a very foolish adventure. He will have to remain where he is over Sunday, doubtless” (pg. 4).

Andrew was telling the truth about having a brother living in Wellington. The 1860 federal census includes Frank D. Foote, then twenty-five, a New York-born carpenter living in the household of James and Mary Griffith. There was also a Mary Foote listed in the same house. The census data for the Griffiths was collected on July 9th; Frank Dunlery Foote had married Mary A. Caughlin in Wellington on June 19th, just three weeks earlier. Frank was still in the village in June 1863, when he was listed as a twenty-eight-year-old married carpenter in Union Army draft records.

Wellington has counted members of the extended Foote family among its residents since its earliest days. Many emigrated from western Massachusetts; some went on to settle Wisconsin. A significant number chose to stay and pursue trade in Wellington, and at least two dozen find their final repose in Greenwood Cemetery. Andrew’s stated intention to “learn the harness makers trade” may have been something of a family tradition. One of the livery stables in Oberlin in the 1870s was run by Foote & Ream, while Wellington’s most prominent livery operation in the 1880s and 1890s was G.D. Foote & Co.

George Dellraine Foote, known as “Dell” or “Uncle Del,” operated a wood-frame livery stable on the south side of Liberty Street at least as early as 1879. He owned three lots corresponding to the present-day location of an imposing brick building (on what is now called West Herrick Avenue) that has the words “WELLINGTON STABLES” in raised stone letters on its pediment. Dell Foote sold his lots to C.W. Horr in 1888, but advertisements for Foote’s Livery Stable appear in The Wellington Enterprise through at least 1899. (Foote died in January 1904.) I can find no extant images of the stable from the nineteenth century. In the absence of further evidence, my working theory is that wealthy businessman Horr probably erected the brick building that still stands today, but the operation continued under its former name. Dell may have remained involved in some capacity, but he also went on to open the Hotel de Foote on South Main Street, which I will discuss at greater length in my next post. 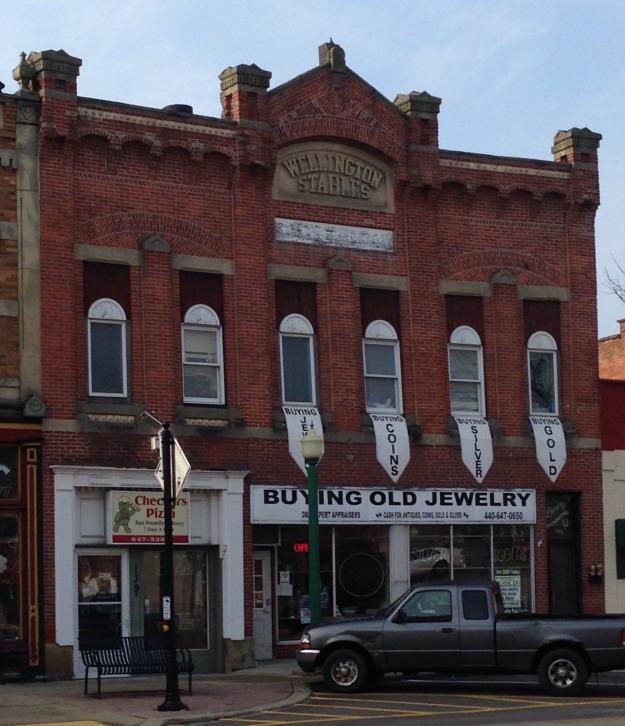 All of that was in the future, however, as Andrew Foote steamed southward toward his date with infamy. Was he telling authorities the truth when he explained why he had run away from home? We know he lied about his age. Why would a twenty-year-old man need to go to such extremes to escape the nest? I wonder if Andrew concocted the story of overbearing parents to cover a darker motivation for fleeing Wisconsin. My first thought when I began to read the initial story was to wonder if the young man was running from a Civil War draft in Wisconsin. The Cleveland Daily Leader reporter clearly wondered the same thing, as the piece notes the Ozaukee County, Wisconsin draft riots of November 12, 1862–just three days before Foote was intercepted in Cleveland. Westfield, Wisconsin is less than one hundred miles from Port Washington, site of the famous riots. It could be a complete coincidence, but the fact that Andrew Foote took the trouble both to dress in women’s clothing and to lie about his age is curious. All northern males citizens from age 20 to 45 were at risk of being drafted, and single men were taken before married men. Even if he was not directly involved in the riots, Andrew Foote may have been fleeing the prospect of military conscription.

Sadly, we do not know the rest of Andrew’s story. One can only imagine the mortification of his family once the articles began appearing in a major metropolitan newspaper. Did news of his misadventures reach Wellington? Did he? Perhaps his brother Frank traveled up to Cleveland, secured Andrew’s release, then put him on the first train back to Wisconsin. He returned at some point, because he died there on January 3, 1865, just two years later. I do not know if Andrew ever served in the Union Army, or if his death was due to natural causes. (His older brother, James Foote, served and died in Chattanooga, Tennessee in 1863.) Andrew Jackson Foote is buried in the Oxford, Wisconsin cemetery with his parents, his older brother William, and a dozen more members of the extended Foote family. 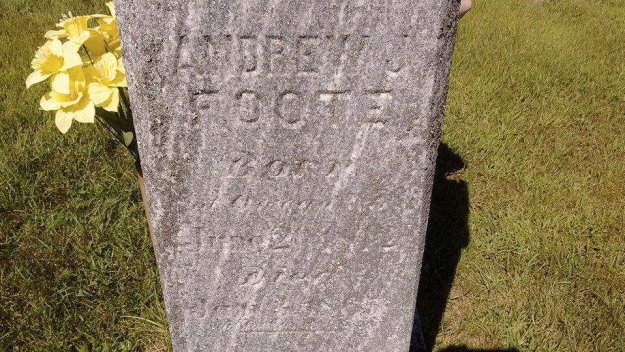