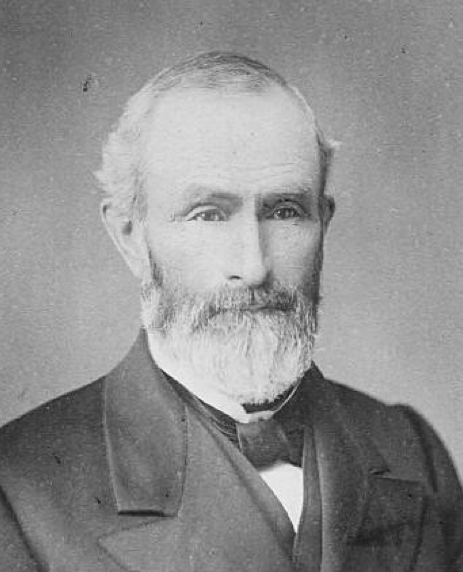 One of the comments I received in response to my previous post was a request for more information on what Wellington was like in its earliest days, particularly for its youngest inhabitants. As I explained in response, it has been challenging to locate primary, or even secondary, sources on that topic. But it later occurred to me that I had run across at least one relevant account that I had not written about previously, so I thought that might make an interesting subject.

Henry Martin Bradley was born–as were so many Wellington settlers–in Lee, Massachusetts. He was related by marriage to the Howk family, one of the first groups of people to arrive in the area in 1818. His own family moved west in May 1835, the month Henry turned eleven. He attended school in the village, but moved to Seville, Ohio at age seventeen. He later continued on to Michigan and then Minnesota, where he became a prominent businessman.

At age 83, Bradley wrote A Brief Autobiography (1907). In it, he described his memories of early life in Wellington. Apparently one of his sons was so embarrassed by the work that he rounded up all the copies he could locate and destroyed them, making the title hard to find today. I am indebted for most of the above information to one of Bradley’s descendants, Stuart V. Bradley, who wrote his own 1976 senior thesis about his family’s history and quotes Henry’s book at some length. I would encourage you to visit his family history website, found here.

Henry wrote that his parents, William and Lucy Ball Bradley, purchased “one hundred acres of land heavily timbered with beech, maple, oak, ash, hickory, elm, walnut, and other timber. This location was four miles from the center of the township where there was then a village consisting of two stores, two hotels, two churches and a school house, also other business buildings incident to such a central business place in a new settlement in the early days. In going from the settlement through the dense forest to our new home, we found the roads hardly passable because of the swamps and the clouds of mosquitoes which seemed to be waiting to greet us as new comers.”

“My parents were of strict morals and of real piety. Like the other children of the family, I was trained up in the observance of all outward duties, and in fear of those sins, which in modern times are too often deemed accomplishments. I was not suffered to speak the name of God but with the greatest reverence. We had family worship every day. The Sabbath was strictly observed as a sacred day–always attending church service at the village about four miles distant. As for morals, my parents and their family lived irreproachably.”

“Once settled in our new home in the dense forest, the work of clearing the land of the heavy timber, and preparing the virgin soil for crops was the first essential. The timber wolves, bears and deer were very numerous, often to our great discomfiture, and they were many nights troublesome. I was a little over eleven years old, but was at this time introduced to an axe, and having learned the art of using it, was required to continue its use together with other necessary implements in removing the large standing timber, and preparing the soil for crops.”

“The work of clearing the land and preparing the soil was attended with much very hard manual labor. The first thing was chopping down the standing timber, then cutting the bodies of the trees into lengths of about fourteen feet, trimming up the tops, piling the brush into snug piles to dry and to be burned a little later. Then the logs of the bodies of the trees and larger limbs of the tops were, with the help of about three or four men and an ox team, drawn together and rolled up into piles for burning. All small stuff on the ground was picked up and piled on the log heaps before burning. When burning these log heaps, great care was necessary to keep the ends of the logs turned into the center so that all should be consumed together.”

“After the burning there would be a quantity of ashes left on the ground. It was my duty to save them by scraping them into a pile carefully while hot, and when cold to haul them to leaches prepared for the purposes of extracting the lye by applying water to them, and then boil the lye down into black salts. From the Ashes saved in clearing five acres of such land there could be about three hundred pounds of black salts secured, which, when taken to market, would sell for from seven to eight hundred dollars.”

“In the season of eighteen hundred thirty-six [when Henry was twelve years old] the lye extracted and reduced produced of black salts about three hundred pounds. It was my duty to take them to market in order to procure flour and groceries for the family. This was done by procuring a crotch of a small tree of the proper shape and preparing it for this purpose with a cross piece, and then placing a trough of the proper size on to it to contain the salts. With the ox team it was drawn to market, two and one-half miles through the woods to a place where black salts were reduced to pearlash. From the sale of this a barrel of flour and other groceries were to be obtained and conveyed home. Instead, however, of receiving the barrel of flour, as expected, I obtained an order for a barrel of flour on a man five miles away from our home, and took all of the next day with the ox team to get it home where it was so much needed. On arriving home at night, the second day with this barrel of flour, there were two men there waiting to borrow as much of it as was possible. Mother was not disposed to lend this hard earned necessity, but father was kind hearted and accommodated his neighbors to a reasonable amount” (Henry Martin Bradley, A Brief Autobiography, pgs. 5-11, quoted in Stuart V. Bradley, Jr., “Moving with the Frontier: The Bradley Family of America 1644-1918,” pgs. 37-38).

Stuart Bradley also recounted, though he did not quote directly, a reminiscence of Henry’s about his brother, Charles, two years his senior. Henry was responsible for herding home the cows at night, which were allowed to wander in the woods during the day. He would shake the large bell of the oldest cow to frighten away any wolves that came too close. His older brother was responsible for milking the animals when they were safely penned. Charles was once punished by being sent to round up the cows in the dark in Henry’s place. He became lost, was treed by a wild pig, but in the morning found himself at a neighbor’s homestead five miles distant. A search party had been organized when the cows returned home without the boy, but they were dismissed when he finally made his way back later that day (pg. 38).

Additional source material about Henry Martin Bradley and his family, including a family genealogy that he compiled and the full text (with illustrations) of Stuart V. Bradley’s senior thesis, can be found here.