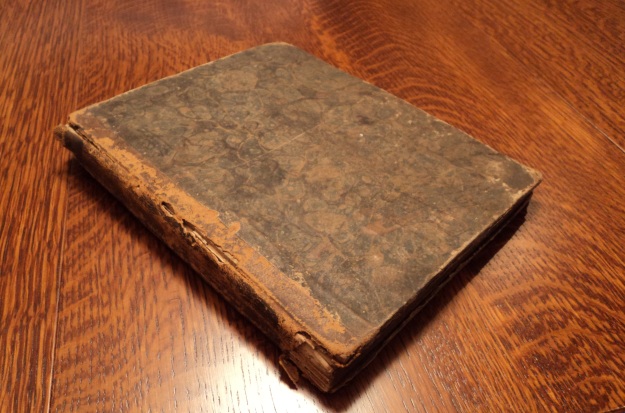 I had the totally unexpected pleasure of handling this little gem over the weekend. I was asked whether I could determine its original owner, and what its purpose might have been. The volume is about six inches wide by seven-and-a-quarter inches long. It is bound in a style called “quarter binding,” meaning that only its spine is enclosed in leather; the rest of the book is covered in decorative marbled paper.

The contents of the volume reveal it to be a daybook, a type of accounting ledger. An artisan or merchant shop owner would often record day-to-day business transactions in a daybook, and then later post them to a (more formal) business ledger. This particular daybook has entries relating primarily to the manufacturing of footwear in Wellington from 1836 to 1838.

The owner’s name was hiding in plain sight, upside down on the pastedown of the back cover. The endpapers apparently served the double purpose of testing the author’s pen flow, as they are entirely saturated in inkblots. (The first American patent for a steel-nibbed dip pen was issued in 1810 but they were not widely used until at least the mid-1840s; this volume was likely written with some type of quill pen.) But the name is still legible and denotes the book as belonging to “John S. Case / Wellington / Lorain C. / Ohio.” 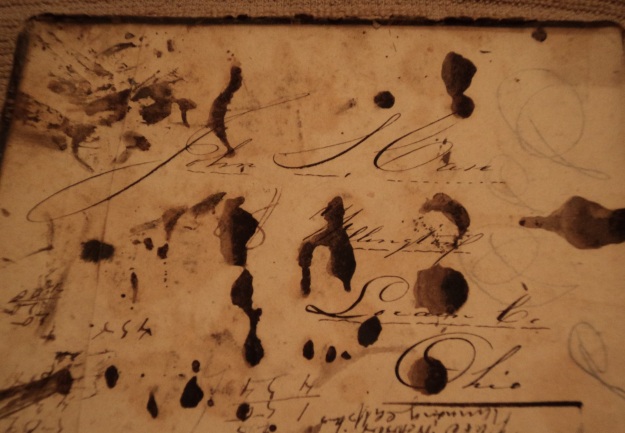 I was familiar with Case’s name, because he sold land to Noah Huckins and Charles Horr on which they erected an ice house and ice harvesting pond in 1881. I wrote a post about that back in November, which featured a map detail showing Case’s property in the 1870s. The lot north of the road includes a structure labelled, “Tannery.” Case’s entry in Commemorative Biographical Record of the Counties of Huron and Lorain, Ohio (1894) confirms his occupation: “In November, 1829, he came to Lorain county, and commenced the tanning business, in 1830, in the town of Wellington, opposite where the ice house now stands, and successfully operated the same until some twelve or fifteen years ago, when he retired from business” (pg. 897). 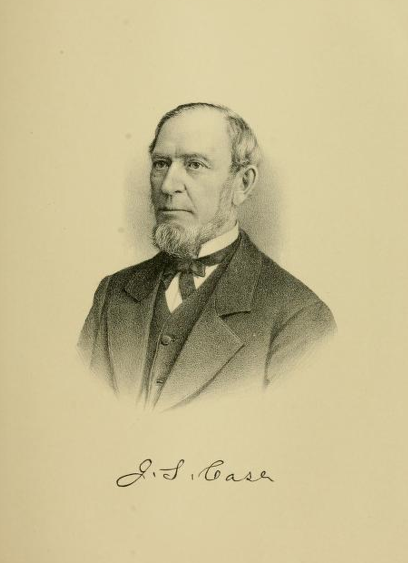 Case situated his tannery on Liberty Street (now West Herrick Avenue)  for the same reason that Huckins and Horr later wanted to locate there: access to the creek that ran across the west side of town. Tanning, which is treating animal skins to create leather, is a very labor-intensive process that uses huge quantities of water. It is also a very smelly process, which explains why tanneries are usually found well away from populated areas.

The daybook is a “who’s who” of early Wellington. Couches, Wadsworths, Lovelands, Manleys, Herricks, Footes, Wilcoxes and deWolfs fill the pages. Dr. Daniel Johns was a regular customer. Case performed services including making and mending shoes and boots–also called “brogans”–for men, women and children. He replaced soles and heels, and most frequently described his own creations as “thick” and “heavy.” This was not delicate or sophisticated cobbling; Case was making rugged items for a village that had been unpopulated wilderness less than twenty years before. He also fashioned and fixed leather articles including animal harnesses, bridles, and even fire bellows. 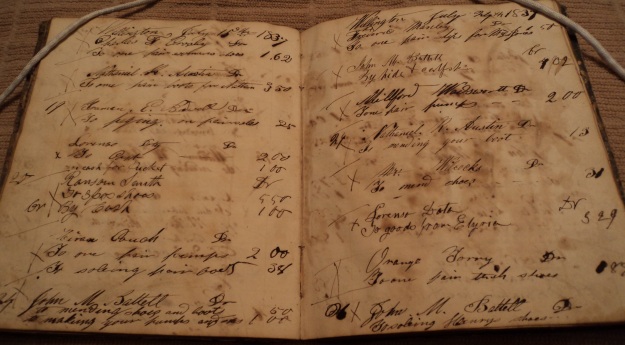 The entries in the daybook follow a regular structure. They are recorded chronologically by the date the request for work was received. The client name comes first, followed by a description of the service (e. g. “1 pr shoes for girl” or “soleing + heeling your wifes boots”). The majority of entries are followed by the notation “Dr,” which in this context does not mean doctor, but rather “debitor.” The fee assessed for the work is listed in the right column; once payment in cash or kind was received–which could sometimes occur long after completion of the job–the left column was marked “Paid” or “X.”

Since specie was comparatively scarce in Ohio in the 1830s, it was not at all unusual for customers to settle their accounts with goods, instead of or in conjunction with cash. On May 1st, 1838, for example, David Howk discharged $0.94 of his debt “By five pts molasses.” His entry was duly marked “Cr” for “creditor.” There is at least one example (June 16, 1838) of Case accepting a “palm leaf hat + ribband” as partial payment. Palm leaf hat manufacture is often cited as a primary example of “outwork” widely engaged in by early nineteenth-century women and girls in their homes, so this hat might represent a Wellington woman’s contribution to her household economy through her own labor.

At some point after the daybook was full, it began a kind of second life as a mini-scrapbook. Someone pasted newspaper clippings, mainly poems and amusing anecdotes, over many of the pages in the first half of the volume. I attempted to trace the source(s) of the clippings, but without much success. Most do not look to me like the fonts and layout styles used in The Wellington Enterprise. One clipping had a mention on its reverse of “Dr. Field” taking over as editor of the newspaper, The Evangelist; Henry Martyn Field assumed that role in 1854. Two of the pastings are poems by Henry Wadsworth Longfellow, both of which were first published in 1866. A receipt lodged in the binding from Runnels & Manchester Insurance of Cleveland is dated July 26, 1881. I have a strong suspicion that it was Case himself, or at least someone in his family, who reused the precious paper of the no-longer needed accounts. The one clipping in the volume that does seem to come from the Enterprise–a portion of an advertisement for A.G. Couch’s cabinet factory is visible on its reverse–is an undated mention of “Lieut. F. S. Case [1838-1887], son of J. S. Case of this place.” While it is unfortunate that these pastings cover some of the earliest pages of the daybook, one could argue that being repurposed as a scrapbook quite possibly saved this historical document for posterity. 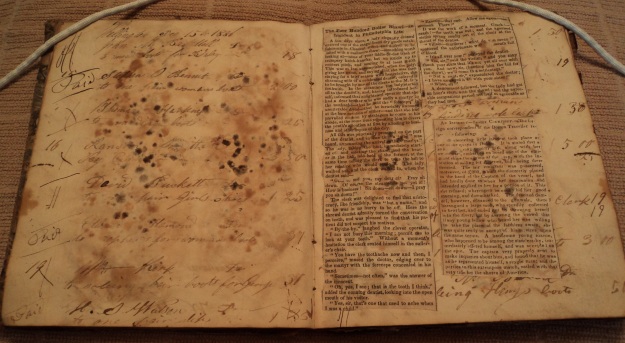 Interior view of daybook owned by John S. Case, showing entries for December 15, 1836. Note that the right leaf is completely covered in newsprint. The darkening of both leaves was caused by a combination of acidic newsprint, animal-based hide glue, and subsequent molding. Private collection. Photo by author.

John Seward Case died in late 1896, aged 88 years, and is buried in Greenwood Cemetery with his second wife, Lucinda A. Ely Case. The present owner of the daybook is not sure how he came to acquire it, and there is no obvious clue within the volume, beyond the later newspaper clippings I have already described. However this little time capsule managed to survive the past eighteen decades, I am glad I got to make its acquaintance. 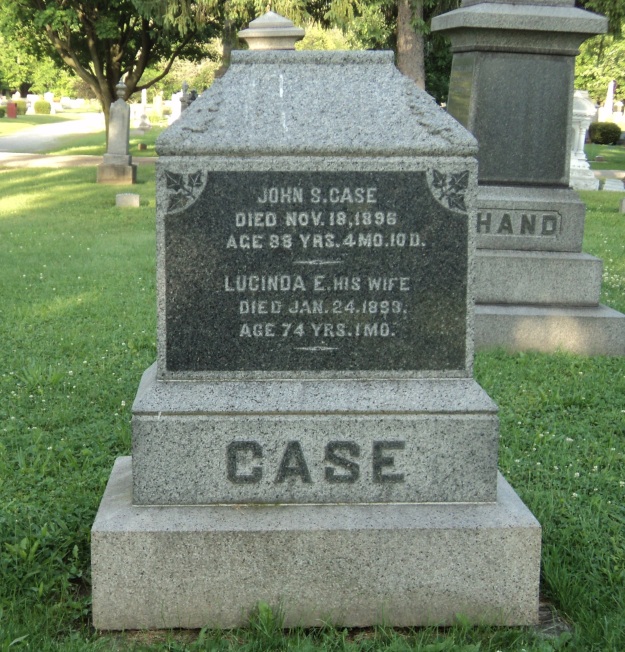