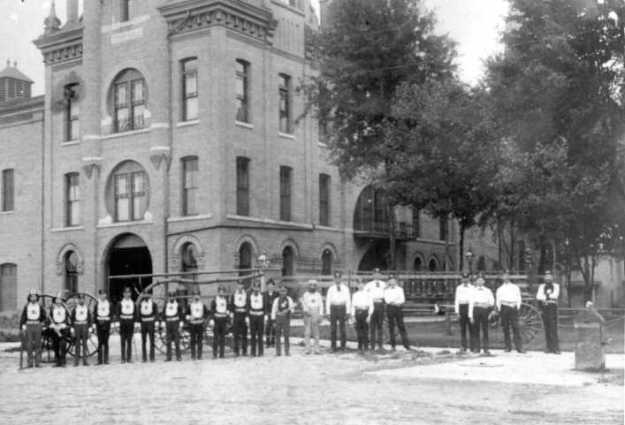 1890 photograph of Wellington’s volunteer fire department and their equipment, arrayed in front of the 1885 Town Hall. Photo 970019 of “Wellington Family Album” Collection, Herrick Memorial Library. Permission to display generously granted by the library.

“We are absolutely without protection now as we have been for years, and we tremble for our safety, as we remember that a fire once kindled in any of our business rows must reduce a large portion of the town to ashes” (The Wellington Enterprise, 9-30-1880, pg. 3).

In 1880, John and Mary Houghton became crusaders in the cause of creating a fire department for Wellington. The town had experienced devastating fires in its past; readers will recall that part of the reason there was such a large crowd in Wellington on the day of the 1858 Slave Rescue was because Public Square was filled with spectators watching a conflagration on the west side of South Main Street.

The “city fathers” apparently began to discuss in earnest the idea of funding a volunteer fire department in the late 1870s, but waited for public opinion to favor the necessary outlay of funds. The Houghtons used their position as editors of the newspaper to urge the public repeatedly to vote in favor of the project. On September 30, 1880, they published an editorial called, “Shall we have a Fire Department?” in which they warned, “Wellington could hardly have a fire in a densely built locality without destroying more value than a well-equipped fire department would cost in a quarter of a century.” They claimed that for only $2,000 the town could put itself “in very good shape” (pg. 3). A month later, no action had yet been taken and the Enterprise ran an even more strongly-worded opinion piece in its October 28th issue: “If a fire should get started in any of our business rows, no human power could stop it till it had all burned up” (pg. 3). They offered to publish any good reasons local citizens would care to offer against such a critical civic investment. 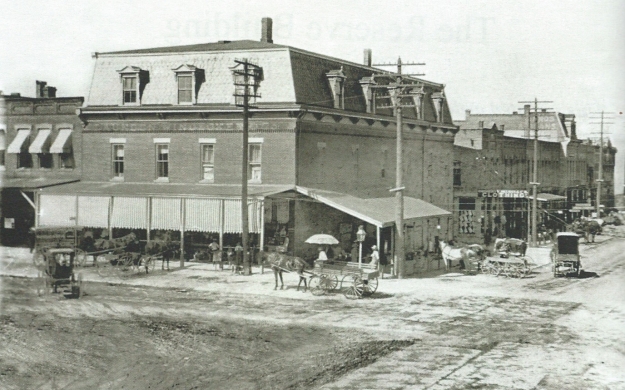 Intersection of South Main Street and Liberty Street (now West Herrick Avenue), Wellington, Ohio. Image must have been taken between 1887 (when firm was renamed Laundon, Windecker & Co.) and 1900 (when fire destroyed the building). Photo courtesy of the Southern Lorain County Historical Society, “The Spirit of ’76” Museum. 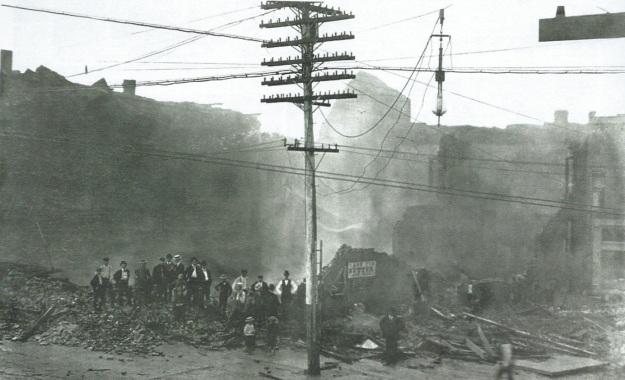 Aftermath of the August 18, 1900 fire that destroyed the building on the southern corner of South Main Street and Liberty Street (now West Herrick Avenue). The fire began when newly-installed gasoline lights exploded. Fortunately, “The Plain Dealer” reported the following day, the fire department was having an ice cream social in the park across the street and so was “promptly on hand.” Photo courtesy of the Southern Lorain County Historical Society, “The Spirit of ’76” Museum.

A volunteer fire department was finally formed in January, 1881. The first meeting was held on the 21th of the month, to elect officers and seat a committee to draft a constitution and by-laws. Mayor E. G. Fuller was named chairman of the group. Just nine days later, late on the night of January 30th, disaster struck the town.

“FIRE IN WELLINGTON. Entire Loss of Three Business Houses. Serious Damage to Four More. A. H. Palmer’s Building Totally Destroyed, and J. H. Woolley’s Brick Hardware Store Nearly Ruined.” Thus ran the headline in the February 3, 1881 issue. The Houghtons, who had argued so long in favor of creating a fire department, were now not only chronicling the devastation wrought by this fire, but were also its victims. Houghton’s Drug and Stationary Store was part of the block of buildings where the fire was centered, and “seemed for a great part of the time, in imminent danger and almost certain of destruction.” Embarrassingly, though a new fire engine had been purchased, it was late getting to the scene; when the alarm sounded, the engine was on the second floor of Timothy Doland’s Carriage Works with its wheels and brakes removed, waiting to be painted with the words “E. G. Fuller,” in honor of the mayor. Several men rushed to the factory to reassemble the vehicle, and “within twenty minutes had it on the street ready for work” (pg. 3).

The damage caused by fire went beyond the obvious loss of those structures and inventories that burned. Even buildings still standing after the event were often so adversely impacted by heat and water that they were usually total losses themselves. In describing the construction of Horr, Warner & Co.’s refrigerated storage warehouse, the paper observed, “It has been suggested that the water from the roof would make very desirable filling for the big cistern near Doland’s building. It would be vastly more pleasant if ones dwelling were drenched with passably clean water in case of fire, though no one intends to be over-fastidious in such an emergency” (10-28-1880, pg. 3). In the days before municipal plumbing and hydrants, rain-fed cisterns were a reliable source for water, and a generally cleaner option than earth-walled, underground wells. 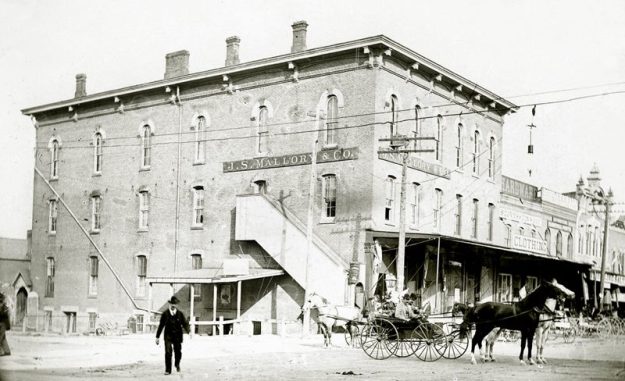 Building known as both the Rininger block and the Horr block, which burned in 1915. Formerly located on the northern corner of North Main Street and Mechanics Street (now East Herrick Avenue). Photo courtesy of the Southern Lorain County Historical Society, “The Spirit of ’76” Museum. 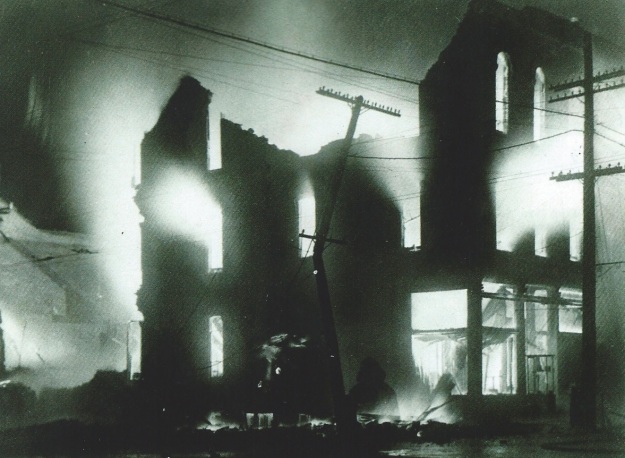 Fire destroying the building known as the Rininger block or the Horr block in 1915. Photo courtesy of the Southern Lorain County Historical Society, “The Spirit of ’76” Museum.

Looting was another problem associated with fires, which frequently happened at night. In the darkness and chaos of an ongoing disaster, people would rush into adjacent buildings to try and save as much as possible. Items were invariably lost, either through confusion or outright theft. In describing the damage done to the post office building, the Enterprise reported, “The effect of the intense heat, and the water thrown upon the walls, has so cracked them that it is feared they will have to be taken down and rebuilt. In addition, a large stock of postal cards and stamped envelopes, besides the coin of the post office, was stolen during the fire.” For the Houghtons’ own part, “the editor’s ‘Easy Chair,’ loaded with a medley of goods foreign to newspaper matter, stood in a cool place under the stars; one gold pen was found in the Park, Monday; a pair of shears shone and grinned among the rubbish…the bright face of the dainty little clock that stood on the office desk was and is among the innumerable things missing…” (2-3-1881, pg. 3).

What is most remarkable about all of this is how quickly the town rebounded. Coverage of the fire appeared in the next edition of The Wellington Enterprise, which went to press on time, and was available for purchase just four days after the event. When one considers that type was individually set by hand in 1881–linotype was not introduced to the world until 1884, and did not come to Wellington until the twentieth century–that is a remarkable feat, given that “not a line of copy was ready” when the Houghtons set about cleaning up the damage on Monday morning, only hours after the fire was extinguished. “Carpenters and glaziers and machinists had to go to work as soon as it was morning to make any place to move into, and many hands worked all day getting goods under shelter and heavy articles in place again” (pg. 3). Remember also that this was occurring in the coldest part of the winter season.

On February 17th, a notice stated that “a hose cart, ladders and truck and other necessary materials have been ordered for our fire department, and it is the intention to provide an abundant water supply as soon as the weather will permit” (pg. 3). Two weeks later, the newspaper indicated that “the old brick building in the park has been remodeled and the lower story fitted up for the fire engine, hook and ladder wagon and hose cart…Two hundred and fifty feet additional of hose, making altogether 750 feet have been lately purchased, and axes, hooks, coats, and various useful articles are now on the way…” (3-3-1881, pg. 3). When the “new” Town Hall was constructed on Public Square in 1885, the fire equipment and volunteers moved into its ground floor. A small, twentieth-century fire station still stands directly north of the Town Hall to this day.

The creation of a fire department was an essential step toward protecting the village, but it could only contain damage, not prevent outbreaks altogether. At least two massive fires struck the center in the first two decades of the twentieth century, completely destroying the “anchor” buildings on two opposing corners. Each was rebuilt in time, so of course the commercial life of Wellington went on. But two beautiful examples of nineteenth-century Italianate commercial architecture were lost, preserved now only in old photographs. 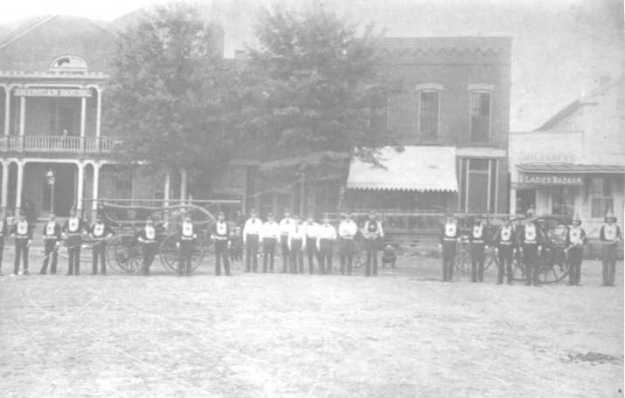 1890 photograph of Wellington’s volunteer fire department and their equipment, arrayed in front of The American House. Photo 970014 of “Wellington Family Album” Collection, Herrick Memorial Library. Permission to display generously granted by the library.