Advertisement or “business card” for builders Fisher & Allyn, front page of the “The Wellington Enterprise,” 1-9-1879. Note that their place of business was inside David L. Wadsworth’s planing mill. Photo by author.

“We call especial attention to the card of H. Allyn, Builder. He has in former years done some of our best work, and has contracted to build the coming season, a $1,500 frame house for Arthur Dimmock and a brick for J. B. Serrage worth $3,000. We understand, he will in company with Geo. Fisher, put in a bid for the entire contract for building the new church. We earnestly hope our Wellington mechanics may be the lucky ones to secure the job, in preference to outside parties” (The Wellington Enterprise, 3-14-1878, pg. 3).

If I had unlimited research time, the nineteenth-century Wellington resident I would most like to know more about would be Hiram Allyn. I have discovered just enough about his life and his apparently unknown contributions to the town’s architectural history that I would love to be able to dig deeper and learn even more.

Allyn did win the contract mentioned above, to build the first Congregational Church to sit on the corner of South Main and Magyar Streets. It was beautifully designed, and equally impressive both inside and out. The total cost of the project came to nearly $25,000, of which some $16,500 went to pay for Fisher & Allyn’s contract. The building had state-of-the-art heating and lighting systems, which were described in great detail in the newspaper as the construction progressed. The congregation was so pleased with the end result that they voted $100 bonuses to each man “as an expression of satisfaction” (The Wellington Enterprise, 4-10-1879, pg. 2). The satisfaction was comparatively short-lived, however, as the church survived less than twenty years. Dedicated in 1879, it burned to the ground in 1895. 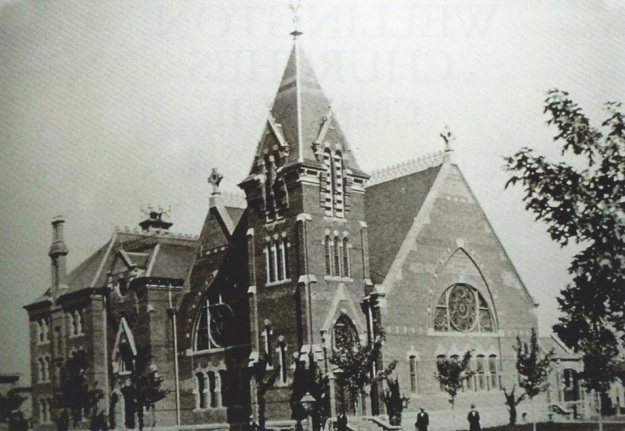 So who was this man who erected such a monumental structure in the town but is remembered by no one? Hiram Allyn was born in 1825 in Barkhamsted, Connecticut. He emigrated with his parents to Ohio when he was ten years old. At age 25, he married Elizabeth Merrell. She, too, had been born in Barkhamsted but had emigrated with her parents to Illinois. When her mother died, Elizabeth’s father decided to move the family back to Connecticut but stopped in Ohio along the way to visit his sister, who had married an Allyn relation. Hiram apparently remembered his childhood sweetheart very well and it was later written that Elizabeth coming to Ohio so serendipitously had “saved [Hiram] a long trip to Connecticut to woo the fair girl” (Sketch of Matthew Allyn and His Descendents to 1884, pg. 23). They eventually had eight children and remained in Wellington for the rest of their married life.

Hiram appears in the 1850 federal census living in his parents’ household along with four siblings and seven male railroad workers, for a total of fourteen people living in the same house. In the 1870 census, he identifies himself as a carpenter; at this point in his life he is married and has six children living at home, ranging in age from 18 years to just one month old. A decade later, aged 54, Allyn again self-identifies as a carpenter. He has just four children living with him, aged ten to twenty years old. His 18-year-old son, Frederick H. Allyn, also calls himself a carpenter. The 1880 census clearly shows Hiram Allyn living on North Main Street, just one block south from Noah Huckins.

Wellington corporation tax records confirm that Hiram Allyn owned two adjoining lots on the southern corner of North Main and Adams Streets, from 1873 until 1885. A house still stands on the corner lot that could very well be the Allyn home. Since the lot was already valued at $740 when he purchased it, it is unlikely that Allyn built the first structure on it, but as a carpenter he may well have made changes or additions to the house over time. 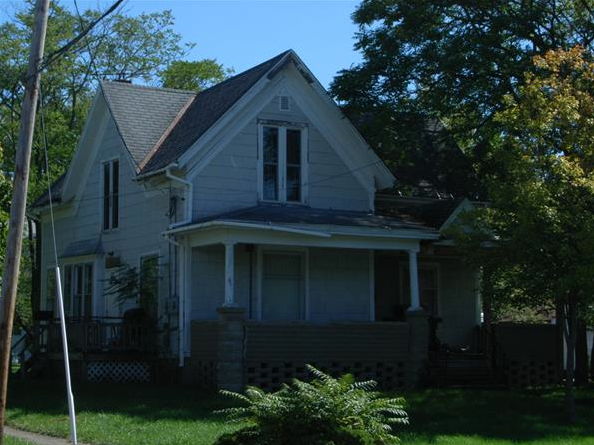 Perhaps more interestingly, Hiram Allyn was the (re)builder of another structure just across Adams Street. Opened as a private school for females in 1849 by Mary Ann Adams, later Conkling (1816-1871), youngest sister of Gideon Wright Adams, this wood-frame structure was referred to as the Female Seminary. (After being absorbed into the Wellington School District in 1864, it became known as the North Primary School.) It appears labelled as the “Semy” on an 1857 hanging map of Lorain County, a tiny mark on a small inset drawing of the village. Mary Ann Adams was a graduate of Oberlin College, served as Principal of the Ladies Department there, and taught at this “school of ‘higher education'” for just a year or two before transferring management of the school to Eliza Hamilton, whose name is the one listed on the 1857 map. 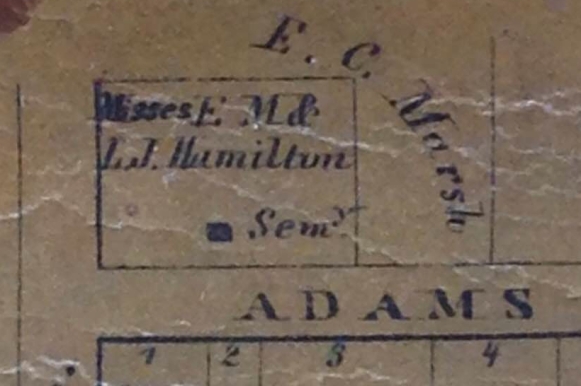 Detail of “Map of Lorain Co. Ohio From Actual Surveys by John F. Geil. 1857.” showing “Semy” or Seminary, on the corner of North Main and Adams Streets. Original object in private collection. Photo by author.

Ernst Henes wrote that Eliza Hamilton later sold the building to the village, “which moved it to 112 Adams Street where it was converted into the residence now the home of Councilman Charles and Mary Oney” (Historic Wellington Then and Now, pg. 11). Robert Walden recorded that “it was sold to Wm. Schroeder, and moved across Adams Street to become the home of the Schroeder family” (Robert Walden Notebook, #A74). Both statements are inaccurate. According to numerous published reports in The Wellington Enterprise at the time, Hiram Allyn bought the building, moved it across Adams Street to his adjoining lot, and there he converted it into a residence.

“The old North Primary School building was recently sold to Hiram Allyn, who last week had it moved on to his land near the old site with the intention of converting it into a dwelling house” (4-27-1876, pg. 3).

“The old North School building which was bid off at auction by the builder, Hiram Allyn, is being constructed into a dwelling, with new window frames, large glass, and bay window; and being of good height, it will doubtless make a comfortable and commodious house” (12-21-1876, pg. 3).

“The old seminary, now the new dwelling house, is further transformed by being painted a light drab, with dark brown trimmings; and blinds have been added. A new fence encloses the yard and lot…” (5-10-1877, pg. 3).

The corporation tax records also reflect an increase in value on Hiram Allyn’s adjoining plot of land. It jumped from just $20 in 1876 to $500 in 1877, the precise time when the school was bought and relocated. Allyn owned the second lot and former schoolhouse until he transferred them to his sons in 1884; four years later, his sons sold the property to William Schroeder. (So Robert Walden was correct that Schroeder eventually became the owner, but twelve years off in the date of that event.) 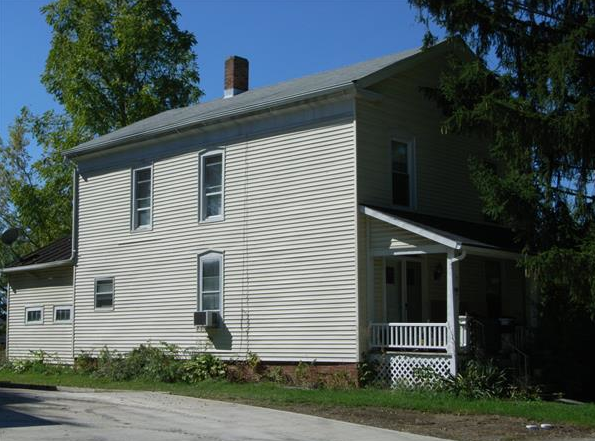 112 Adams Street, Wellington, Ohio. Contains the structure of one of the first wood-frame schools in the town, purchased and later remodeled by Hiram Allyn.

The Wellington Board of Education replaced the wood frame structure with a brick one, which was also called the (new) North Primary School. That brick building still exists today on the northern side of North Main and Adams Streets. It was eventually sold by the Board of Education to the local Catholic Diocese and for many years served as the “old” Saint Patrick Catholic Church. 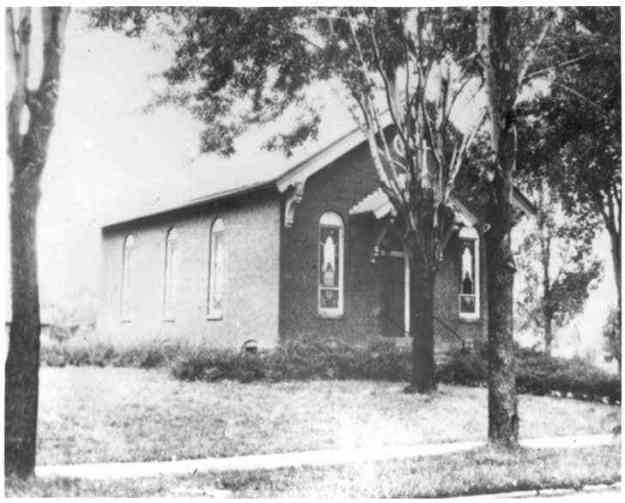 Hiram Allyn will come into our story again later, actually in connection with the South Primary School on South Main Street. This post is already quite lengthy but I do want to wrap up his biography. His financial situation seems never to have been a strong one, ironic in the face of the grand structures he was erecting all over town. His health was also not good, and he had at least one major accident that is recorded; Allyn fell off the scaffolding at the Serage residential construction site on what is now East Herrick Avenue, where he “sustained severe injuries” (The Wellington Enterprise, 7-11-1878, pg. 3). He continued to work, but by 1885 he was spending the summer visiting relatives in Kansas and Iowa as a means of improving his health. He died in 1888, more than a quarter-century before his beloved wife, Elizabeth. Both are interred in Wellington’s Greenwood Cemetery.

In 1911, The Wellington Enterprise was edited by a man named Henry O. Fifield. He lived in a house at 226 South Main Street, and he was having it renovated. On May 3rd of that year, Fifield published the following anecdote about his own home improvements: “In tearing away the upper west cornice on the Editor’s house the other day, the carpenters discovered the name of one of the workmen written on the breeze-board under a moulding. It was Samuel Allyn. His father was the builder of the house and when putting on the strip the then young man evidently thought he would leave ‘his mark'” (pg. 7). Hiram Allyn continues to leave his mark on Wellington today, even if we don’t realize it. 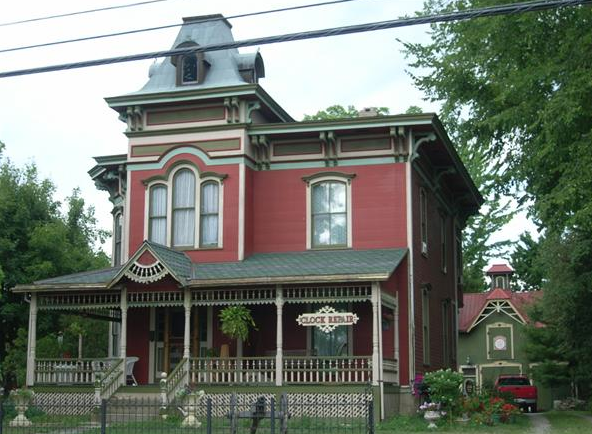