I have already written about John and Mary Houghton as members of a North Main Street community of neighbors. But they were integrally connected to the daily life of nineteenth-century Wellington in numerous other ways.

John Wesley Houghton was born in Batavia, New York in 1834. He graduated from what is now Baldwin Wallace University in Berea, Ohio in 1860 and settled in Wellington soon after. (He received his Master’s degree from the same school in 1863, and in later life served it as a trustee.) His first wife, Mary E. Seymour, mother of three surviving children–a fourth lived only eleven days–died young. Robert Walden writes that she passed away in 1861, while her tombstone in Greenwood Cemetery reads September 6, 1873. The 1873 date must be the correct one, because even Walden records the birth of the couple’s third child as occurring in 1872 (Robert Walden Notebooks, #A18). The middle daughter, Flora, died as a teenager in 1879, and is interred with her mother.

Houghton received his M.D. and for fifteen years “he practiced medicine when it was necessary to travel on horseback, and continued to do so until his failing health compelled him to give up his practice” (The Wellington Enterprise, 2-26-1924, pg. 1). On October 22, 1874–a little over one year after his first wife’s death–he married another Mary. Mary Hayes was the oldest daughter of a large family from Penfield, Ohio. She was born in 1837 and though fragile health interrupted her formal education, she was a voracious reader and was considered highly intellectual by everyone who knew her. By the end of her life she was known as a journalist in her own right, and has an entry in the 1897 publication, American Women: A Comprehensive Encyclopedia of the Lives and Achievements of American Women During the Nineteenth Century‬.

Mary Hayes Houghton (1837-1921). Co-editor of “The Wellington Enterprise” for nine years, though even her husband acknowledged, “She contributed the larger share of copy.”

From 1876 until 1885, the Houghtons owned and co-published The Wellington Enterprise. As I mentioned in an earlier post, they lived across North Main Street from Noah Huckins’ Italianate house. During the period in which they were the owners and editors of the paper, Huckins or one of his companies was mentioned at least one-hundred-and-thirteen times. The Houghtons also ran a drug, book and stationery shop on South Main Street, which further served as the town post office until 1879. Noah Huckins would have walked right past it on his way to work at his cheese box factory on Magyar Street each day. I imagine Huckins and the Houghtons strolling down Main Street together, chatting about items of personal interest that sometimes found their way into print.

I find two examples particularly charming. On December 14, 1876, the following notice appeared in the paper. “Mr. Huckins, walking on the railroad track between his business and home last Wednesday, slipped and fell through a culvert, striking the rail in his fall cutting a deep gash above the right eye. He came into Houghton’s drug store and his wound was strapped. It was very fortunate that he was not rendered unconscious by the blow and fall, as the day was bitter cold and the bottom of a culvert does not readily come under observation” (pg. 3).

And on May 10, 1877, another: “The little son of N. Huckins [Howard, just shy of his third birthday] has had only partial use of one foot for nearly three weeks, and it could not be determined just what was the matter. A few days since a small speck indicated that something had entered the flesh which nature was making some endeavor to expel. By probing, a needle was found, which was removed entire. It had entered head first when stepped upon, after his feet were undressed for the night; and at the time no evidence of it could be found” (pg. 3). When I first read these accounts, I was so curious as to how they came to be in the newspaper. Had Noah Huckins presented himself at the printing office, asking that these stories be published? I love the idea that his neighbors knew the details of his personal life and used some of the more interesting anecdotes to fill empty column space. 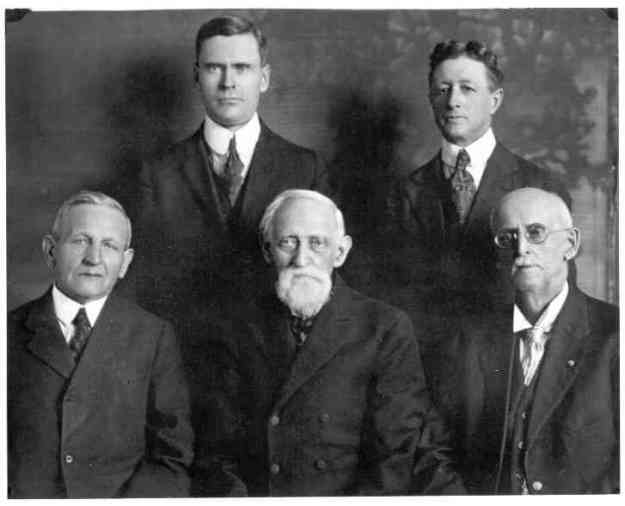 While running the paper, the Houghtons were strong editorial advocates of modernizing and expanding the town. They encouraged real estate development to increase the permanent population and argued in favor of introducing telephone service. (Once telephones were installed in 1883, Houghton’s Drug Store helpfully sold printed cards with the telephone subscriber list for ten cents.) John served as mayor and president of the school board, while Mary was very active in the Methodist Church and was the president of a local women’s club. In addition, she was also a member of the Ohio Woman’s Press Club and the Woman’s Christian Temperance Union, and a founding member of both the Woman’s Home and the Foreign Missionary Societies. It was William’s frail health that eventually forced them to sell the Enterprise.

Mary Hayes Houghton died in November 1921. Her husband passed away a little more than two years later, in February 1924. Houghton’s Drug Store, in operation on South Main Street from 1865 until 1909, later become the A & P Grocery. The building was demolished in 1976 to make way for the parking lot of the Sparkle Market grocery store, which is today Farm & Home Hardware Store. The Houghtons are interred together in the mausoleum in Wellington’s Greenwood Cemetery. When Mary died, the Enterprise noted, “She was a lady of unusual refinements and attainments, and made a place in the life of the community that will be hard to fill” (11-15-1921, pg. 5).