I have not had occasion to do any extensive research on the life of early Wellington settler Alanson Howk (1800-1850), but after posting about William and Charlotte Howk yesterday, I discovered something that I thought was worth sharing. I found the above image in the Herrick Memorial Library’s “Wellington Family Album” collection. Pretty house, I thought; shame it is no longer standing. But just as I was mistaken about the Timothy Doland carriage factory on North Main Street, I was also wrong about the Alanson Howk house. This morning I wandered over to East Herrick Avenue and found that, though it is today stripped of its lovely porch, reports of this house’s demise have been greatly exaggerated. 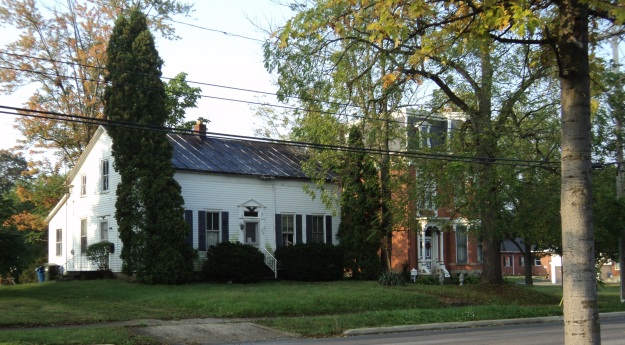 Unfortunately, I have no additional information about when the house was constructed. I cannot even say with total certainty that the house was built by Alanson Howk, the early settler. It may be misattributed, or the name may be correct but refer to another Alanson Howk. The 1818 emigrant Howk later had a son called Alanson, for example, though the son seems to have died as a child in the late 1830s. As any genealogist knows, teasing a family history apart is very difficult when the same names repeat across the generations; walking through Wellington’s oldest burying ground, one would think that it was a condition of settlement that all men be named John and all women Electa!

I then walked around the corner to visit the green space in front of the Wellington Town Hall to photograph the plaque that commemorates its donors. I had hoped its contents would be more illuminating, but the text only confirms what I already knew without adding any additional details, not even Mrs. Howk’s full name, which was Theadocia Clifford Howk (1805-1880).

This brief but evocative passage from The History of Lorain County, Ohio (1879) sums up virtually everything else I know about Alanson Howk. I am not even certain how he is related to William and Charlotte Howk. If any descendants of the family are reading this, I would love to know more.

“No further accessions were made to the settlement [of Wellington] until in the late fall of that year [1818]. One morning the tinkle of a strange cowbell was heard from the direction of the center. Curious to see from what it proceeded, the sound was followed, and an emigrant’s team was found grazing, and the first shanty erected was found occupied, not by strangers, but by friends from their Massachusetts home, Josiah Bradley and wife, John and Alanson Howk, and their mother, Miss Electa Howk, and a sister and ‘Dean’ a female servant, a relic of Massachusetts slavery, who had continued to live with her old mistress after the adoption of the constitution of 1780, and had followed her into the wilderness. They had reached the center of the township after dark the night before. Their trail ended there. The deserted shanty was found and occupied until morning should reveal the whereabouts of the settlers. They were never accorded a more joyful welcome than that which then was given them…Alanson Howk settled upon lot twenty-two; John Howk upon lot fifteen; and Josiah Bradley upon lot number forty” (pgs. 348-349).

Portraits of Alanson and Theadocia Howk, held in the collection of the Southern Lorain County Historical Society, “The Spirit of ’76” Museum. Photos by author.

Though the text is slightly confusing, I wonder if “Miss” Electa Howk was John and Alanson’s sister, rather than their mother, as the grammatical construction suggests. I also suspect this is the same Electa Howk whom we met earlier, eager to become the first bride in Wellington by uniting herself in marriage with Amos Adams the younger.

Alanson Howk died April 9, 1850 at 50 years of age. He is buried in Wellington’s small “Old” or “Pioneer” Cemetery on West Herrick Avenue. The contrast in styles between his simple headstone, erected a decade before the Civil War, and Theadocia Howk’s more elegant stone, erected at the height of the “Cheese Boom,” is a lovely illustration of the gentrification of the town in such a short period of time.

UPDATE: For a (2015) three-part examination of the life of Dean, emancipated slave, and the Howk family with whom she emigrated from Massachusetts to Ohio, start here.