If you have ever visited Wellington, no doubt you remember the Warner mansion. It has been the largest, most magnificent house in town for a century and a half. Though no longer a private residence–it is now the Norton-Eastman Funeral Home–it sits like a jewel on impressive South Main Street grounds, just steps away from the grand home of Warner’s business partner, C. W. Horr.

I know less about S. S. Warner than I do about his partner. Perhaps because Warner’s interests called him so often to the state and even national political stage, I have not found him crossing the paths of the far-less-wealthy people that are the main focus of my research. Most of what I know about him comes from two sources: 1) Commemorative Biographical Record of the Counties of Huron and Lorain, Ohio (1894); 2) the brief biographical sketch attached to a collection of his papers held by the Rutherford B. Hayes Presidential Center. 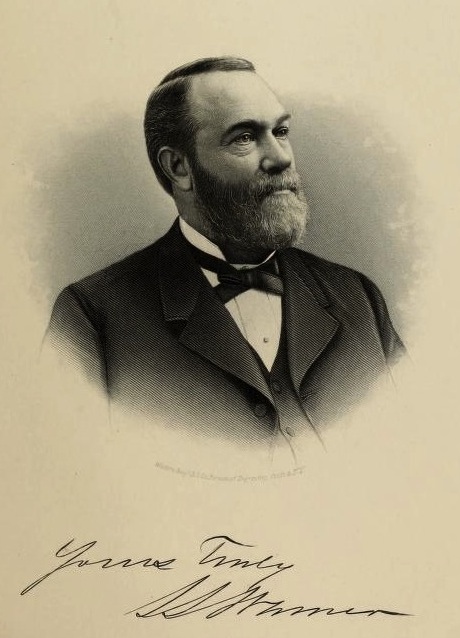 Sidney Warner was born in Suffield, Connecticut in 1829. Many of the early settlers to Lorain County emigrated from New England in the early nineteenth century. At age ten, he moved with his family to Huntington, Ohio, where he lived until relocating to Wellington nearly thirty years later. He married Margaret Anna Bradner of Huntington in 1855 and they eventually produced four children.

Warner was involved in numerous business ventures, including the organization of the First National Bank of Wellington in 1864. He was elected its first president and held that position for four decades. Readers of earlier posts will recall that Frank Chapman Van Cleef argued the creation of the bank, and subsequent increase in credit and available capital, was one of the factors essential to producing the “Cheese Boom.”

The businessman also held a number of political offices, including two terms as Lorain County representative to the General Assembly of Ohio, three terms as State Treasurer of Ohio, and even candidacy for the governorship of Ohio. He was president and trustee of a number of civic organizations, such as the Citizens Mutual Relief Association and the Cleveland Hospital for the Insane.

I have not looked as deeply at Horr and Warner as I have the people I will describe in later posts. They are important figures in the history of town, but I offer them here as background for the more detailed story I hope to tell. So when I suggest that Charles Horr was the driving force behind Horr, Warner & Co., and that Sidney Warner’s primary contribution was as a financial backer, it is purely speculation on my part.

Warner’s fortune was clearly secure even prior to entering into the profitable partnership; he built his enormous, elegant home upon moving to Wellington in 1868, the same year the company formed and only two years after the first cheese factory was opened in Huntington by the Horr brothers. The Lorain County News had reported in 1867: “Hon. S. S. Warner is putting up a dwelling on the lot next south of Thos. Kirk’s, on Main Street. This we understand is to be occupied by his father, Chauncey Warner, and that next season Mr. W. will erect another just south of this for himself” (10-23-1867, pg. 3).

Warner had a financial stake in both the cheese and vegetable sides of the business; each was extremely successful. According to A Standard History of Lorain County, Vol. 2, “The farm department [was] conducted by Wean, Horr, Warner & Company and the cheese department under the title of Horr, Warner & Company. In 1897 both departments were consolidated as Horr-Warner Company…” (pg. 979). “Wean” was Watson R. Wean, Sidney Warner’s son-in-law by virtue of marriage to his only daughter, Orrie Louisa Warner Wean. In addition to Wean’s business ventures, he also worked as superintendent of Wellington schools for nearly a decade, was mayor of the town from 1884 to 1887, and served on the Building Committee for the 1885 Town Hall. In 1878, the Weans built a home only slightly less opulent than the Warner house, on the lot directly adjacent to its south. That house still stands today at 380 South Main Street.

Sidney S. Warner died in 1908, aged 79. The cheese manufacturing division of Horr-Warner Co. survived only four years longer. Warner and his wife Margaret are buried under an impressive obelisk in Wellington’s Greenwood Cemetery; in death, as in life, they are next to the Weans.